Updated on a regular basis

Memories of a frozen lake

@MannGeorgia Wow, #OlaGjello, "Across the Lake", transfixed me in the same way upon hearing Rodrigo's Concierto de Aranjuez. (Third Programme 1963). Transported me onto a frozen Lake Kilpisjärvi in northern Finland (1995) where I discovered cross country skiing.

Notes in the margins

Updated on a regular basis

There's an air of mystery in Formby today.

My first job on leaving school was as a Student Civll Engineer working for the London Midland Region, LMR. The first 6 months were spent in a drawing office very close to Mornington Crescent underground station. After acquiring the drawing skills needed I was then transferred to the bridge section in Stephenson House near Euston Station.

Access to the original drawings like the one shown below was an every day experience for all of us.

It was always a highlight of the day if an original by Stephenson himself came to hand.

The Mersey railway tunnel officially opened #OnThisDay 1886 between Liverpool and Birkenhead. Designed by Charles Fox, and still in use today, the engineers were his son Douglas Fox and James Brunlees. https://t.co/zqybJfGl54 https://t.co/AOq0pJA6B3 pic.twitter.com/xbK0WzfnEA

We are funded by the UKRI Arts and Humanities Research Council, Arts Council England and Paul Hamlyn Foundation over five years.

Oops. I got it wrong on my Monday post, on reflection I should have written, 'The sight of a major snow fall in Formby is uncommon '.

I promise to be more precise next time.

The sight of snow in Formby is uncommon. I've lived here since 1972 and major disruption to life in Formby can be counted on the fingers of one hand.

I await the outcome of this forecast with a degree of scepticism.

The Met Office has put a yellow warning in place for ice but there's also warning of wintry conditions https://t.co/7EnSVuj9Ob

The Real Value of Trees

Too many of us take little or no notice of trees in our environment.  I suppose it has something to do with the idea of 'familiarity breeds contempt', trees are simply there and after a while we hardly notice them.

The longevity of trees also plays its part, trees live out their lives to a  much longer timeline. We live busy quick lives, we literally 'don’t have time for them'.

Unless someone threatens to cut them down then we often spring into action.

Ask yourself what do know we really about them. Have a look at the following does this surprise you?

Studies show: Trees are the true air conditioners. Under a tree, the temperature can be 15 C° cooler than measured in the ambient air. Shade and evaporation create the same effect as a conventional A/C, but without electricity. A tree produces about 20-30 KW/h, as much as ten A/C pic.twitter.com/wi8B3to2TD

I spotted this video by Sarah Scott while browsing the web. It was just too good to ignore. Enjoy Sarah's celebration of the natural world.

I hope you enjoy it as much as I did. Its a breath of fresh air during this period of miserable weather.

I'm fortunate to live locally to pine woodlands that are home to red squirrels and earlier last year I made this short film about the magic of being in nature.

Sadly I haven't enjoyed a Chinese New Year in Liverpool since 2017. On that occasion it began with a Dragon procession from close to the Pagoda in Liverpool.

The crowds were huge but cheerful and well ordered. Finally after a powerful series of deafening crackers exploding at various points the procession finished at Great George Square. 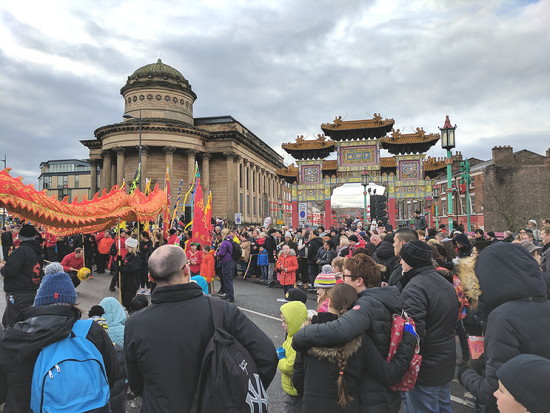 This year is a celebration of the year of the rabbit. Here in Liverpool I'm sure the festival will be equal if not better than previous years.

In Chinese culture, the Rabbit is a symbol of longevity, peace and prosperity. 2023 is predicted to be a year of hope.

People born in the Year of the Rabbit are believed to be vigilant, witty, quick-minded and ingenious.

Do go, you'll not regret it.

🎉 | Liverpool’s Chinatown is set to be a festival of colour and sound this January as it welcomes the Year of the Rabbit. #ChineseNewYear 🐰

No need to book, just turn up on the day. Beat the January blues and kick start your 2023 by taking time out to enjoy Formby’s wonderful wildlife. Join Paul our Community and Participation Manager on this short and gentle walk - a great way to boost your well-being by connecting with nature and people.

What a fantastic project. I wonder whether Sefton Council would get involved?

We like being in tree-lined streets. Trees separate us from the roadway. Encourage slower driving 🚗 offer shade in summer, stunning colour in Autumn and absorb pollution

I'm really looking forward to the year of the Rabbit.  Add this to your diaries and go to Liverpool's very special celebrations on the day.

I can promise you will thoroughly enjoy it. I learned more about about China, its culture and geography the last time I went in 2017.

@AWongjewellery speaks about how his work has been influenced and his work has developed though his recent DYCP @ace_national Award #CNYLiverpoolhttps://t.co/I9eMtr7RQJ pic.twitter.com/ROyu6DcaaZ

Have a good weekend.

WEEKEND!!! Time for yourself and your loved ones. How about a concert of nature for body and soul with flowing bubbling water, birdsong, rustling leaves? A wonderful good morning and a blessed day to my beloved and much appreciated fellow inhabitants of planet Earth. ❤️🍀🌳🌲🌱💚 pic.twitter.com/mAkFsFiNCM

What is Yarn Bombing?

If you look it up on Google you'll find an extensive article on the Wikipedia website.  Here's an extract:

While other forms of graffiti may be expressive, decorative, territorial, socio-political commentary, advertising or vandalism, yarn bombing was initially almost exclusively about reclaiming and personalizing sterile or cold public places.[1] It has since developed with groups graffiti knitting and crocheting worldwide, each with their own agendas and public graffiti knitting projects being run.[2

Time is ticking on for our secret yarn bombers who’ve already been working hard for several months to get ready for this year’s Yarn Bombing celebration! #imagineformby #formby #yarnbombing pic.twitter.com/Pe1Qp6kc9H

It’s clear we need PEOPLE-POWER to force a change - join our January Welcome Call & be part of the solution to the energy crisis.
Sign up 👉 https://t.co/NzPmY3LThQ#CostOfLivingCrisis #InsulateBritain pic.twitter.com/XFW1B2FNW6

Continue reading "Notes in the margins" »